Have a coffee with legs in Santiago, Chile

Santiago is a gem to discover.

Jaw dropping snow-capped peaks greet you as you decend from the air, beautiful green parks where lovers canoodle are scattered amongst the city’s high-rises, impressive architecture rich in history look down on massive squares where locals gather to dance the afternoons away and artisans and tourists co-habitate in eclectic suburbs.

Once you get over the steep $95 reciprocity fee Australians have to pay to get into Chile, you´ll fall in lust with this city and a few days is more than enough time to experience the best sights Santiago has to offer.

We stayed at La Chimba Hostel in Barrio Bellavista.  The streets of this funky suburb are lined with colourful graffiti art which brightens your way during the day but it’s at night that Bellavista really comes alive with bustling bars and restaurants.  There is something for everyone but we chose to walk past the nighspots blaring Gangnam Style, instead preferring a more authentic South American experience at a tango bar with latin dancing.  I highly recommend this suburb for fellow travellers.

Barrio Bellavista is also at the base of San Cristobal Hill which at 300 metres above the city offers sweeping 180 degree views of the skyline.  It is also where a 22 metre white statue of Virgin Mary stands offering those who need it a place to worship but mainly just another photo opportunity for tourists.  The furnicular was not running while we were there so we decided to stretch our legs by walking the steep route to the top.  It was quite a challenging half an hour walk and not for the unfit but the views were well worth it.  We found the afternoon was a better time of day as the smog had lifted a little, but don´t expect crystal clear views.

Another great spot worth visiting is Plaza de Armas, which gives you a little perspective of how old Santiago is.  The Plaza was designed in the 1500s but most of the impressive buildings including the Metropolitan Cathedral were built in the 1800s.  A must for history buffs but it is also a great place to just people watch, from buskers jostling marionettes to locals dancing.  It is even a popular meeting spot for the city´s stray dogs to sniff each other out.

One of the most amusing experiences we had while in Santiago was in a coffee shop/bar. What we thought was going to be a quick caffeine fix ended up one of the unusual highlights of our stay. You can either choose to take a seat or stand at the bar and get served by the most voluptuous women you have ever seen wearing dresses barely covering their boobs and butts. I actually thought we had walked into a gentlemen’s club and as the only blonde female in the joint I received my fair share of uncomfortable stares. Brad’s eyes popped out of his head and suddenly found a new appreciation for the coffee houses here and is seriously thinking of opening a franchise back home. 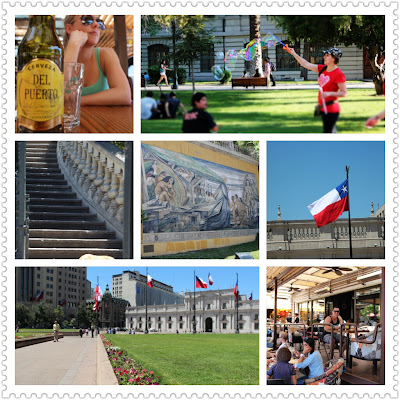 With limited time in Santiago overall, we chose to do the hop on hop off bus tour of the city for about 19,000 Chilean Pesos each which is about $40. It’s definitely worth doing as you will see so much more of the city than you normally would and get off at all the best sights the city has to offer.

As far as South America countries go, Santiago wasn´t ´cheap´ so expect western prices if you come for a visit but overall we had a great time and it was an excellent introduction to the continent.

One thing is for sure, our limited Spanish is only just getting us by and the most common phrases used so far are hola (hello), adios/ciao (goodbye), buenos dias/tardes/noches (good morning/afternoon/evening), habla englais (do you speak English?), no intiende (I don´t understand).  We are picking words and phrases up quickly though so hopefully we´ll be quite the linquists when we get home!