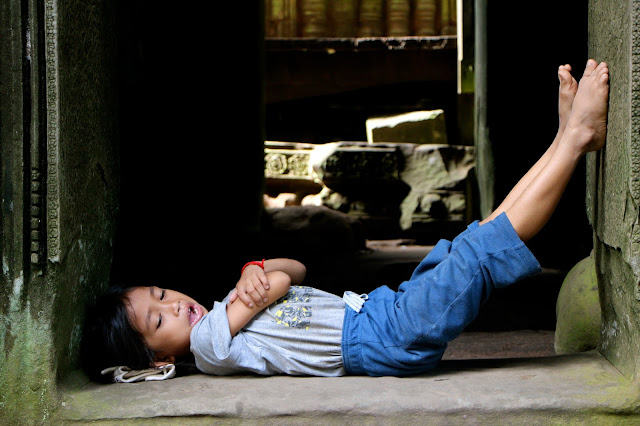 “Where are you from?” A young boy accosted us in one of Siem Reap’s main streets.

“We’re from Australia,” we said.

We sounded amused, we’d heard that plenty of times before.

What we hadn’t heard in any of our trips around Asia was what he rattled off next.

In fluent English he proceeded to tell us that Kevin Rudd was our Prime Minister again, but only recently.  Before him Julia Gillard, before her Kevin Rudd, before him John Howard and so on and so on until he had named every single one of Australia’s PMs right back to Edmund Barton.

Gobsmacked, we looked at each other and whispered “we couldn’t even do that”.

I can’t even remember his name.

He was only about ten years old and would ride his bike the six kilometres from his home in the Angkor Archeological Park to town every day to sell books for his family.  He told us his siblings weren’t as smart as he was.

At the time I didn’t understand why he didn’t just stay around Angkor and try to sell books to tourists there instead coming all the way into Siem Reap.  It wasn’t until the next day when we arrived by tuk tuk that it dawned on us.  He was competing with hundreds of children who flood the park from sunrise to sunset selling their wares all for the tourist dollar.  It’s easier in town.

For us it’s sad to see children so young ‘working’.  For them, it’s life.

We soon realised that most of the Angkor kids could recite Australia’s Prime Ministers. 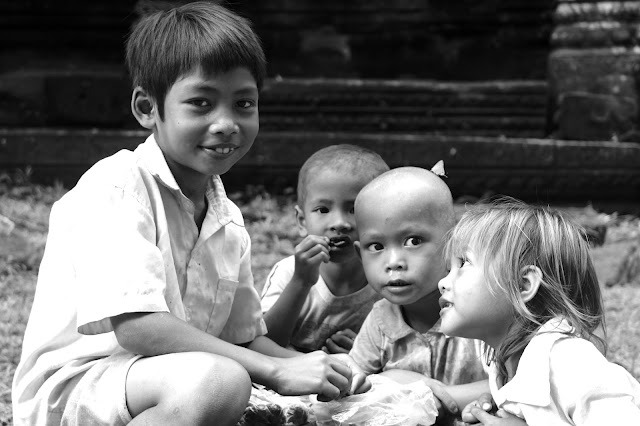 We were admiring the beauty of Ta Phrom temple quite early one morning when we stumbled upon a group of children laughing.  I asked if I could take their photo, they said yes.

Their smiles were encouraging.  All they wanted was to see the pictures afterwards.  They giggled, amused by the images. 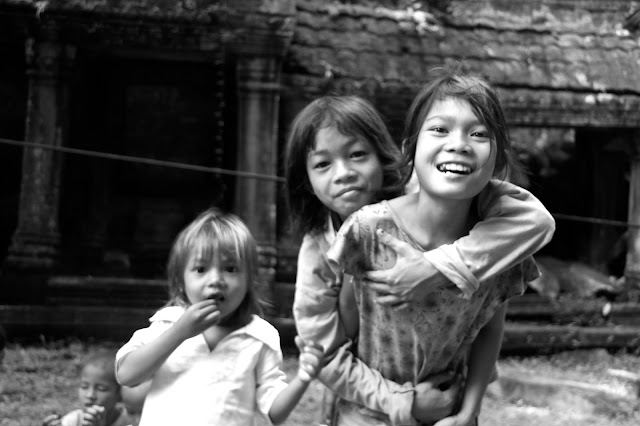 I took about eight photos, shared two minutes of conversation, then thanked them for their time and waved goodbye.

They waved back but it took merely two steps before the eldest was at our heels. 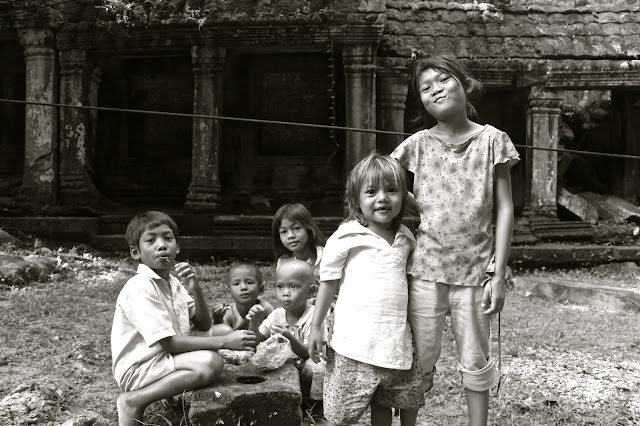 “We need money for school, no money, no money miss, we need money for school.”  The well rehearsed whine repeated over and over.
Even if that were true, I doubt it would get used for their education.
Begging isn’t encouraged in Cambodia but some children here don’t even have to put out their hands.
We watched as tourists approached the kids instead of the other way around, willingly handing over money even before asked.
With irresponsible visitors like this, it’s easy to understand why some children don’t go to school choosing to ‘hang out’ at the temples instead.
In a moment of escaping the heat of Bayon temple underneath the shade of a tree we saw two young boys talking and laughing with one another while other kids were begging for money.
It was only when the local police drove past and they ducked behind the ruin’s wall that we knew they weren’t supposed to be there.
Little rebels not going to school or begging, just happy being kids.
A rare sight indeed. 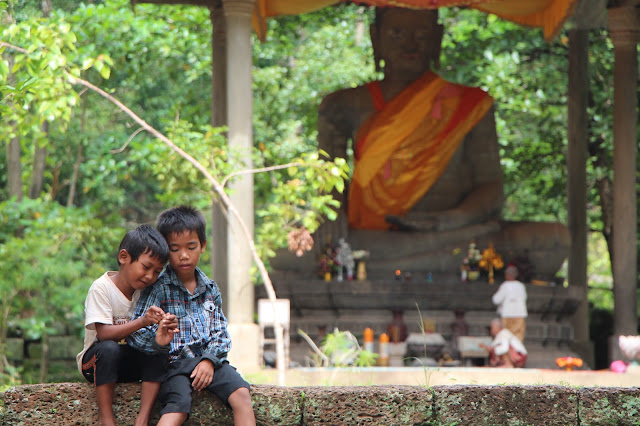 On our last night in Siem Reap, I was approached by another young boy.
My robotic response had become simple, I was already shaking my head and saying no.
At this stage I had become desensitised to the whining, that I hadn’t even heard what he was saying until about the eighth time he repeated it.
“No money miss, we need milk, milk to feed my baby sister.”
All of a sudden his mother, severely disfigured appeared from nowhere, a crying baby attached to her hip and shaking an empty milk bottle.

“No money miss, we need milk, milk to feed my baby sister.”

In a matter of seconds the boy grabbed my arm and dragged me to the convenience store, up the aisle and pointed to the baby milk formula.
They wanted the larger container, the price tag 24 dollars.  I said it was too much and agreed on the smaller one for 7 dollars.  I paid the money and we left.
How could I say no, at least the baby wouldn’t go hungry.
“You’ve just been scammed,” Brad said as we headed off down the road.
“What?” I turned around.
It was then I saw about six women all with empty milk bottles and crying babies trying to lure tourists into the convenience store.
I hadn’t seen them before.  I wondered what they did to the babies to make them cry on queue.
I felt used, angry and upset I had been scammed and wanted to go and demand my money back but after a few minutes I gained perspective.
I don’t think twice about spending that money at home.
I should be more angry that I pay 7 dollars for two coffees at my local cafe.
Although the mother didn’t fill up that milk bottle straight away and feed her child, I have no doubt that money eventually will go to helping feed her family.
A motive, similar to the other kids of Cambodia we encountered.