That is the most asked question since we’ve returned home from our travels.

I still struggle trying to explain our experience properly.

Cuba is a fascinating and challenging country and one unlike any I have ever visited before.

I loved it, but I hated it.

It’s everything I thought it would be, but I wanted it to be so much more.

We spent a week in the country’s capital, Havana over New Year’s Eve.

We had no issues with getting into the country.  We simply bought a $US15 ‘tourist card’ from the airline at our departure point which was El Salvador.  Ignore the advice from the Cuban Embassy in Canberra and offered by travel agents that you need to organise a $AUD60 visa before you leave Australia , you don’t.

That rude blast was our welcome and first impressions of Cuba at the airport.  We had tried speaking Spanish to a taxi driver, albeit not fluently but at least we tried.  He didn’t appreciate it, instead he seemed frustrated with our very presence.

We brushed it off having travelled enough to not let one person having a bad day ruin our experience.  We learnt pretty quickly that Cubans are very well educated and almost all of them speak fluent English.

Because we only stayed a week in Havana, we chose to stay at a hotel in the old quarter to be a close walking distance to most attractions.  If you don’t want to stay in one of the government hotels, the other accommodation option in Cuba is family homestays or casa particulares.

We were greeted with a beautiful foyer and two ice-cold mojitos at the boutique Hostal Los Frailes, an old monastery.  This was the welcome to Cuba we had been looking for.

An electrical fire in one of the rooms meant they had to put us up in another hotel around the corner for the night.  We had no problem with this, it was all part of the experience.

It turned out to be the Ambos Mundos Hotel, famous for where Ernest Hemingway used to stay when he was in town.

We walked into the foyer and walked back in time.

The beauty of Cuba is that for our generation, everything old is new to us.  We never experienced a fifties era of smokey piano bars, rhythm and blues bands on street corners, cigar-smoking men dressed in dapper suits drinking rum at lunch while old cars roamed cobblestone streets outside.

It’s a set straight out of the movies.

We couldn’t believe our luck as we sipped on another mojito at the hotel bar, but as I will explain later, Ambos Mundos Hotel is also where the most sour taste of Cuba was left in our mouths.

There are many things to see and do in Havana.

Take a ride in an old ‘yank tank’ taxi.  It’s no wonder they have become such an iconic symbol of the city, the streets are dotted with them.  They’re not all ‘official’ metered ones though so always organise a price before you hop in.

Other transport options include the Coco scooter taxi and pedal-powered bikes which other than walking is the only way to get through parts of the old town which is blocked off to traffic.

The colourful characters will keep you entertained for hours and you might even be lucky to catch a street fiesta especially around New Years.

Be warned though, snapping away will cost you.  Cubans are very savvy when it comes to accosting tourists who have just taken a photo of them.  The standard price, 1 CUC which is the equivalent of $US1.

You can’t change Australian money in Cuba either, Canadian is best as there is a bigger fee exchanging US dollars.  The few ATMs don’t accept Mastercard either, only Visa.

One of the biggest parties of the year takes place in Havana’s Cathedral Square.  Your ticket gets you a gala dinner, unlimited drinks and entertainment, set against the backdrop of a 235 year old cathedral.

Although a tad on the expensive side but comparable to celebrations back home, this is one of the best New Year’s Eve parties I have ever experienced. 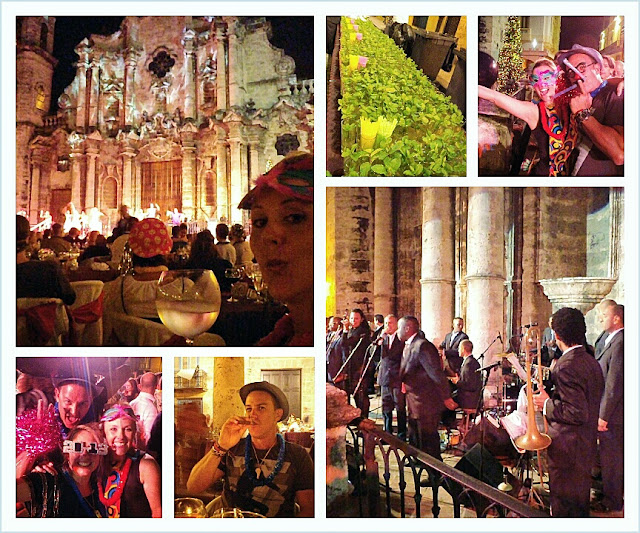 In the 18th century, a morning and evening cannon shot boomed out across the bay to signal the opening and closing of the gates to protect the city.  Today the 9 o’clock cannon shot is a symbol of history and tradition, a great tourist attraction and a useful time keeping tool for locals.

It’s also a great spot to take in the views of Havana City at sunset.

To get there, catch the local ferry across the bay to Casablanca, walk up the hill where Che Guevara’s former house sits, take in the view at the big white statue of the Christ of Havana, continue past an open-air military museum with weapons from the Cuban Missile Crisis on display and onto the fortress.

You can also access Morro Castle from here which sits precariously between the bay and ocean, its presence still a reminder of the country’s vulnerable past.

I wouldn’t normally include a cemetery as a must do for a city but the Colon Cemetery in Havana is pretty impressive.

It also has a 23 metre high monument to firefighters who lost their lives in the great fire of May 17, 1890.

Catch a taxi from the old town to get there, don’t attempt to walk.  Take it from me, it’s quite a distance!

If you do want to stretch your legs, a great route to take is along the ocean’s edge and sea wall of the Malecon, an 8 kilometre esplanade.

Despite most of the buildings along this stretch being quite dilapidated compared with inside the old quarter, it gives you a better sense of the ‘real’ Havana.

Visit the Museo de la Revolucion (Museum of the Revolution).

Housed in what was the Presidential Palace, it became a museum following the Cuban Revolution when Fulgencio Batista was overthrown as President by Fidel Castro and his followers.  Bullet holes are still in the palace walls today and there is quite a collection of blood stained uniforms on display.

It is quite an interesting take on the events of that time, a lot of chest pumping propoganda which feels like Castro himself has personally written.

The most amusing item on display is a wall of caricatures of Batista, Ronald Regan, George Bush Senior and George W Bush with words including “Thank you cretin for helping us to strengthen the revolution”.

Head to the beach.

About a 20 minute drive from the city is the Playas Del Este, a 9 kilometre stretch of coastline scattered with beach towns.  We spent the day in Guanabo, a beach-side community favoured more by local tourists than international ones.

Having just been spoiled by the beaches of Mexico, Guanabo failed to impress us on the same level.  This is Cuba though and ruined and desolate buildings aside, the water was beautiful and a refreshing change to the hussle and bustle of the city.

Have a mojito or two at the Havana Club Museum and Bar.

There’s a great band and a great vibe.  At 4 CUC a drink though, you can find cheaper elsewhere.

These are just a few of the many things to see and do in Havana, let alone the rest of Cuba.

And it seems word is spreading.

One of the reasons for Cuba’s recent improved tourist numbers, is that it is a country in transition.

After five decades of Cuban communist style rule, in the post Fidel Castro days there has been a shift away from state dependence.  Although Cuba is still ruled by a Castro, Fidel’s brother Raul, Cuba is transforming into a country of individual responsibility and private enterprise.

Although it is a work in progress many Cubans still live in poverty and with restricted freedoms.

This is no more evident than trying to speak to Cubans in the tourism industry.  Trying to muster a smile from their faces is a hard task and in general they exude the epitome of unhappiness.  They don’t dare to dream of being a tourist themselves one day, but whisper how lucky we are to be one.

We put all this down to some of the reasons we had our belongings stolen from the Ambos Mundos Hotel.

A camera case with USB sticks of all of our trip photos was taken from our room while were having breakfast.  We didn’t notice until four days later but by then they insisted that nothing had been found, reported or handed in.

Frustrated and with no other option we offered a monetary reward.

Two hours later we were told there was a package waiting for us at the hotel reception and we had until 8 o’clock to pick it up.  It was all there, they had no use for USB sticks.

We considered not giving the reward we offered and just taking our stuff and leaving however we had just booked a taxi through our other hotel for 4am the following morning for the airport and didn’t want to risk our safety.

This was so frustrating, not because we were blackmailed out of $100 but because it encourages them to continue doing it to other tourists.  They literally screamed from the back room when we left, it’s probably more money than they get paid in a year.

As it turns out the taxi driver who took us to the airport also tried to rip us off which ended in an unpleasant argument.  We had pre-organised a price with the hotel but didn’t reiterate it to the driver so he put the meter on and took us on a scenic route to the airport.  We stood our ground and walked off only paying the original price.

So it was in the final hours of our Cuba trip that almost ruined our whole experience and I hate that.  But I guess those moments can be the pitfalls of travelling.  Every experience is different and it all comes down to circumstance when you are there.

Cuba is not a place I am dying to return to right away however I would love to go back and see it again down the track someday to hopefully see its transformation and potential realised.