We hadn’t heard great things about Belize City during our stay on Caye Caulker.

In fact it was locals who had told us not to go there because it was really quite dangerous.

With limited time and so much ground yet to cover, we decided to heed their warning and head straight to Guatemala.

According to the United States consular affairs website Belize recorded 145 murders in 2012, a record number.  Belize’s per capita homicide rate ranks among the highest in the world with the majority occurring in Belize City.  While most of the violence is due to an ongoing warfare between local groups over drug smuggling, threats and robberies against tourists are not uncommon. The Australian Smart Traveller website says you should exercise a high degree of caution in Belize because of high levels of serious crime.

Needless to say we were quite happy to jump straight off the water taxi at Belize City and straight onto a bus headed for the Belize-Guatemalan border.

Within five minutes of crossing the border our smiles were ripped off our faces and so was the money out of our wallets.

Lesson learned, but when border authorities tell you there is a price to pay to enter the country, ask for written evidence.  We didn’t and we paid the price.  It wasn’t until a traveller behind us questioned the fee and argued with the officer that we realised we should have done the same.

A frustrating trip to the ATM where we received less money than we asked for and an overpriced tour later and our first impression of Guatemala wasn’t great.

Lucky for them it was Christmas Day and the season for giving.  Unlucky for us.

We arrived in Flores, a town surrounded by lake Peten Itza, and our base to discover Tikal, the most famous Mayan ruins in Guatemala.

Don’t get me wrong, Flores is lovely with the lake giving the town a peaceful, serene aura however it is quite small and there isn’t much to do other than circumnavigate the water’s edge and meander through the laneways.

The lake is a very popular spot for locals and because we were there on Christmas Day many families took the opportunity to spend time with one another by the edge.  At night the streets were lit up by flashes of firecrackers and laughter of the children lighting them.

We were up around 3 am for the sunrise tour of Tikal.

The bus took about 75 minutes to get to the park and then once through the entrance gates, we walked about 15 minutes in darkness until we were clapping by candlelight beneath the main temple.

Without sight our senses were heightened to the acoustics of the plaza which fascinatingly echos back the sound of the Quetzal bird.

A steep climb to the top of another temple and suddenly we were sitting on the steps of ruins which are thousands of years old staring out across the treetops of the Guatemalan rainforest.

In silence, we sat and waited for the jungle to wake.

UNESCO lists 54 species of animals and 333 species of birds here and while not all of them were vocal, we started to hear the music of jungle’s morning as the fog began to lift.

The mist clouded our view of a crystal clear sunrise however a foggy dawn didn’t quell the magic and mystery of this ancient site.

The eerie atmosphere didn’t clear until around 9 am when clear skies revealed the true beauty of this UNESCO World Heritage Site.

Tikal’s charm isn’t what has already been discovered.

It is that many of the ruins and history are still uncovered with funding inhibiting excavation.  Due to the nature of the limestone, the ruins are better preserved under the ground than to be exposed to the elements.

It’s beauty far surpasses that of Chichen Itza which in comparison, in my opinion, was very sterile and overcrowded by tourists. 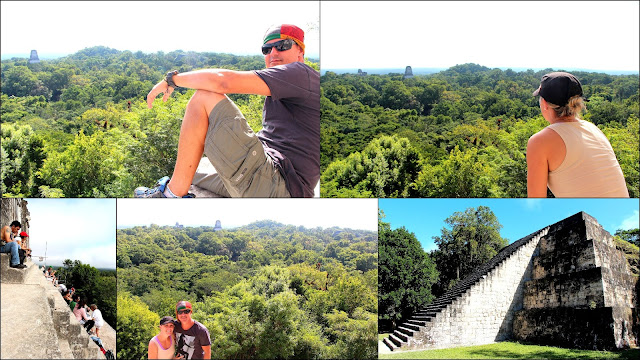 Although doing the sunrise experience meant the hoards of visitors were yet to arrive, in those early hours with a handful of other tourists, Tikal felt like ours and ours alone to discover.

Despite many travel warnings not to travel on public transport at night in Guatemala, we chanced a night bus to Guatemala City just so we didn’t waste a day.

Once we set off, it wasn’t the fear of being hijacked or robbed that concerned us the most, it was the rickety double-decker bus with no shocks and a lead foot driver.

A ten hour trip swaying dangerously from side to side kept us awake all night and fearing every corner.

Like Belize City, we hadn’t heard great things about Guatemala City so we decided to just travel on an hour further to Antigua.

Antigua is a beautiful, picturesque, colonial city, lined with cobblestone streets.  The UNESCO World Heritage Site used to be the capital until a series of earthquakes in the 1700’s destroyed thousands of buildings.  You can still see many of the ruins today untouched where they crumbled hundreds of years ago.

Antigua is also nestled between three forboding volcanoes which offer hiking and gravel boarding experiences for the adventurous.

The majestic mountain scene also offers a spectacular sunset vista from one of the many rooftop bars.

Antigua is a place we could have easily unpacked our backpacks for a while, opened our Spanish books again and really immersed ourselves in the culture of Central America.

Oh and it has really great coffee too, the best of all our travels this trip.

We were truly disappointed to leave this intriguing city.

« Risk your life trying to get to Caye Caulker, Belize. It’s worth it!
Drink Havana Club and smoke Cuban cigars on New Year’s Eve in Cuba »