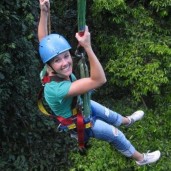 The main reason I love sharing my travel adventures is not to brag. No really, it’s not. Yes, there is always that ‘from where you’d rather be’ postcard perfect photo but it’s never intended to be a thumb-nosed ha ha

We decided to include Hawaii on our worldwide itinerary purely for the downtime. It was the first stop as Brad had been working pretty hard up until our departure and because we’d been a little pale from the Brisbane winter,

I’m going to give you a BIG tip for when you visit Big Island, Hawaii. GO NIGHT DIVING OR SNORKELLING WITH THE MANTA RAYS. I don’t think I can express it anymore than in caps! Although initially hearing that it

On the 9 May 2015, the scene was set at Hotel Urban in Brisbane for the engagement party of two beautiful friends Ben and Sarah. The guests arrived to a gorgeous burnt orange sunset beyond the floor to ceiling glass

Splash out on a water bungalow experience

I’ve always wanted to stay in one of those resorts suspended over the ocean.  You know, like the picture perfect water bungalow post cards of Bora Bora or the Maldives. It’s no wonder these specific places come to mind when

It’s such a beautiful privilege to be able to capture life’s milestones of the little loved ones in my life. On the G20 weekend in November my nephew Jack and his gorgeous little cousin Anna were christened in Mackay, Queensland.

When my beautiful friends James & Tanya got married I asked if I could video their wedding and they said … YES! Not only did I put together a traditional wedding video so they could cherish the memories forever, I

A BookFace friend recently posted an amazing photograph from the top of Mount Kinabalu. “I want to do that!” I exclaimed and promptly put it on the bucket list. I didn’t realise that within a few short months, we would

Steal a dance in Borneo

This video comes with a disclaimer. As much as we love the song Stolen Dance by Milky Chance, we were definitely NOT stoned in paradise.  That would be illegal. Most of the time we were sober, except for this one

Get your dive ticket

Yeah, I’ve dreamt about it but it usually doesn’t end well. I think an unhealthy fear of the creatures of the deep has caused me to put off this bucket list item for quite some time. If it wasn’t for

According to Wiktionary, a Supergirl is a particularly successful, talented or otherwise remarkable girl. I dedicate this vlog to my little supergirl Miss Milly.

Home is where the heart is

More than three decades ago my parents were sold on a little white house at Chandler. It had funny arched window facades and an orange tiled roof. A toad pond at the front and a dam at the back. I’m

I have to admit this wasn’t on my bucket list. Actually, the feminist side of me was totally against the idea of watching scantily clad women playing football being exploited for the enjoyment of men. Even a work colleague was

Hit the slopes in Canada

If you asked me what champagne powder was prior to our trip to Canada I would have said a type of cocktail. That’s how little I know about skiing. The last time I ‘hit the slopes’ and by hit I

Volunteer to help save the Orangutans in Borneo

I have travelled in various ways to many countries around the world which have provided me with amazingly rich travel experiences that will stay with me forever. This trip was my turn to give back with more than just the